Holidays came to a screeching halt today and after sleeping in past my alarm, I hauled myself back into the office and H was prodded off to school. (A, sadly, had already been back to work for a week). 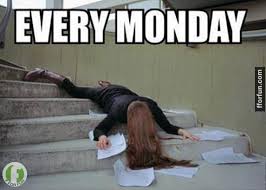 As much as I would have liked to be on holidays indefinitely, I was looking forward to today a little, as I was ready to get started with H’s math program. I don’t exactly recall the 7 stages of grief but am becoming familiar with the stages of (homeschooling math) grief:

Terror, sheer terror, some extra terror, lots of planning, then a dash more terror before finally: acceptance/let’s get this over with already.

We had a really great first day. H’s attitude about starting his math was really great and we got through the things we had planned for today, including a riddle to torture H until tomorrow:

A man is found dead at his desk with a gun in his hand. There is a tape recorder lying on the desk next to the man. When the detective picks it up and presses play, he hears the following recording: “I can’t go on anymore. I have nothing left to live for,” followed by the sound of a gunshot. How does the detective immediately know that the man did not commit suicide?

As we were wrapping up, I watched/listened to him beating a yoga ball with a ruler while war whopping, (yes, war whooping). My poor nerves? SHATTERED!

And then I had an epiphany: his teachers, school, friends, family, etc. etc., and yes, his mother, flood him with:

And they all have the same message: change.

And why? Really why? I mean, we do have to figure out a way to learn this math but maybe there’s room for a some war whopping… and yes, maybe a little change from me too.